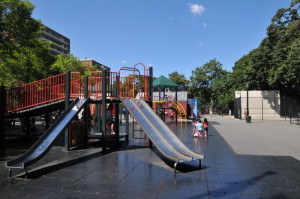 One of these five playgrounds was what is now known as the Lawrence Virgilio Playground in Windmuller Park. Today’s NYC Parks website confirms that “The land comprising Windmuller Park was acquired from the Windmuller family in 1936 and the park was officially opened to the public in 1937.”

Although the 1937 press release does not mention which New Deal relief agencies were involved, researcher Frank da Cruz explains here that almost all New York City Parks Department projects between 1934 and 1943 were carried out with New Deal funds and/or labor, and that after April 1935, the WPA quickly became the main source of this support.

The playground in Windmuller Park was renamed in 2002 after Lawrence Virgilio, a firefighter who died at the World Trade Center on 9/11. The park was significantly upgraded in 2007. An NYC Parks article about the reopening explicitly cites the WPA’s role in developing the park in the 1930s.