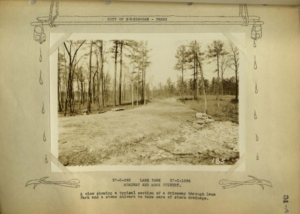 Birmingham’s Lane Park was the site of substantial work relief efforts on the part of multiple New Deal agencies: the Civil Works Administration (CWA) and the Works Progress Administration (WPA).

Historical marker: “The land was also used for the Allen Gray Fish Hatchery (fed by Pullen Springs), a stone quarry, a complete baseball diamond, and a golf driving range. Several of the stone structures were erected by the WPA. Two hundred acres are now the home of the Birmingham Zoo (est. 1954) and the Birmingham Botanical Gardens (est. 1962).”

A CWA/Alabama Relief Administration project was soon after launched to fully develop the park. “A main roadway was laid out and graded with concrete and stone culverts built over streams on the roadways and pipe lines laid for smaller stream crossing roadways and some streams straightened in places. The water lines of the Park were partly laid.
Seven small individual shelter buildings were scattered over the park, and one large stone shelter building was erected and practically completed.
The rock used in all the buildings was quarried was quarried in the Park and all timbers were hewn from trees cut on the property.
Over 12,300 cubic yards of earth was excavated, 12,000 cubic yards of embankment and 1,000 trees removed, with 2,250 cubic yards rock quarried, with on 10′ x 41/2″ bridge; one 7′ x 6″; one 4′ x 4″; one 3′ x 3”, and seven pipe culverts averaging 35 feet long, constructed throughout the Park.
All bridges were constructed of masonry side walls, concrete slabs and masonary [sic] wing wall, and parapet wall, and all culverts with rock head walls.
A main comfort station building of 39′ x 80′, and seven shelter buildings, averaging 13′ x 20′ was constructed by rubble masonry quarried on the job. The main framing doors, windows, jambs, and roofing shingles were made from park timber.

There are 4 photographs in the report, two showing road and rustic stone bridge construction (which it says was not completed in the short life of the CWA), one of the rustic stone Barbeque Pits, and the rustic stone community house that was “built with modern plumbing and other features”

The BHAMwiki entry “The Works Progress Administration assisted the Birmingham Federation of Garden Clubs in the planting of 5,000 trees and shrubs to create the “Lane Park Arboretum” in 1935. The planting plan, featuring native mountain laurel, magnolias and wildflowers, was designed by Thomas Brooks. Under the direction of Conrad Myrick and James Parks, a number of pavilions were erected.” The article incorrectly identifies structures as built by the WPA instead of the CWA. The WPA also constructed the Allan Gray Fish Hatcheries, fed by Pullen Springs, which provided 325 gallons of water per minute. The hatcheries, a long-planned project of the Jefferson County Sportsmen’s Association, provided stock for recreational lakes in the region. The Hartselle sandstone used to build these structures was quarried within the park’s borders. A baseball field was also constructed.

The Shades Valley Boys Club, Canterbury Methodist Church, and the city of Homewood all contributed to the park’s early development. The park’s new athletic facilities were utilized by the American Legion MacFadden Recreational Program to provide sports equipment and supervision for children in the surrounding area. Neighbor A. D. Griffin was appointed as the park’s superintendent. For several years the WPA continued to provide funding for a group of black women to periodically cut down weeds. By 1940, however, many of the picnic tables, park structures and plantings had been damaged by vandals and careless picnickers.

In an ironic twist, the former quarry used by the CWA/WPA was redeveloped to hold homes that exemplifies the insane financial bubble following the takedown of the Glass Steagall Act and other important regulatory agencies that has exacerbated the homeless crisis. In Feb 2020 a house that was listed at $365,000, in June 2021 it was listed at $1,600,000. 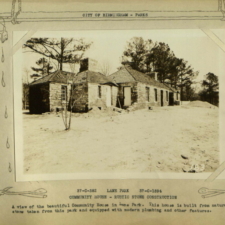 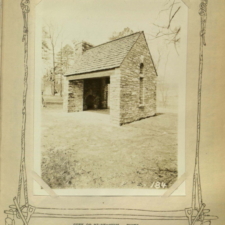 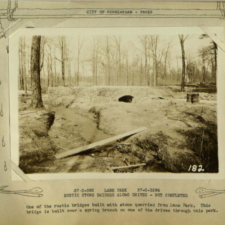