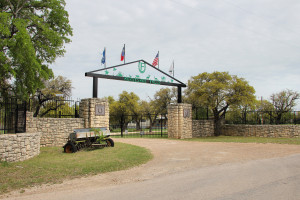 In 1933, the Lampasas Chamber of Commerce raised $2,500 to buy 154 acres of land along Sulphur Creek and presented the land to the State of Texas as a site for a state park. Civilian Conservation Corps (CCC) Company 896 arrived the same year, set up Camp Miriam (in honor of Miriam “Ma” Ferguson, the Governor of Texas) and began development of the park. The CCC cleared brush and cactus, built gravel roads, a native stone entrance, a concession house, a low water dam, native stone picnic tables, barbecue pits, native stone cabins, a baseball field, and a polo field. Lampasas State Park opened in 1934.

The state conveyed the land to the City of Lampasas in 1937. In 1941, the city sold the park to Margaret Griffin. Leo K. Gunderland bought the land from her the same year. The now privately owned park was renamed “Gunderland Park” and later renamed “Horseshoe Falls.” Horseshoe Falls was converted to a private exotic game ranch and fishing resort in June 1995.