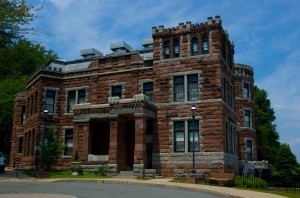 A Paterson landmark dating back to 1892, Lambert’s Castle was originally home to the Lamberts, a wealthy family that owned area silk mills. The building fell into disrepair in the early twentieth century, was purchased by the city of Paterson for $125,000 in 1925 and in 1928 transferred the title to the Passaic County Parks Commission. The Works Progress Administration (WPA) helped to expand and build up the grounds in 1940.  According to a WPA press release, “A picnic area developed by WPA which adjoins the tower is one of the most popular improvements at Garret Mountain. The tower itself was fitted with a new concrete roof, new steps and guard rails, new stucco-covered metal-lath walls and a concrete shelter. Drainage was provided for the whole area and a general program of beautification carried by the WPA workmen.”  (National Archives.)