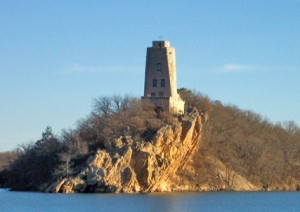 Both the CCC and the WPA worked extensively on Lake Murray State Park in the 1930s. The lake itself was completed in 1937 and opened to the public in 1938. The Lake’s iconic Tucker Tower was started by the New Deal workers, but not finished until the early 1950s. An article on www.americasstateparks.org describes CCC work in the park in detail:

“Members of the CCC constructed 10 state parks in Oklahoma, beginning with Lake Murray State Park, the first and largest of the original parks. Recruits began construction on park structures in 1935, two years after the inception of the CCC. Following a plan already in place at many of the national parks, architects who designed the outbuildings at Lake Murray incorporated the same look, described as “naturalistic architecture,” stressing the use of the plentiful supply of existing native materials. Massive oak logs from the abundance of trees in the park were cut to form roof rafters; uncut native stones were handled with much care so the colors and shapes remained unscathed. These stones formed the foundation and walls of the park administrative offices and homes, group camp buildings, cabins and a picnic pavilion. Even today, the style and general appearance of the buildings present themselves as if they have always been a part of the surroundings and were formed within the backdrop of the land.

Although the detailed work on the buildings in the park are the most visible reminders of the work accomplished by the CCC; some of the finer points of thorough craftsmanship exists on culvert bridges and foot-bridges at Lake Murray State Park. The bridges were built with limestone rock that was quarried from the area and placed in an arrangement known as a “keystone” formation. The rocks were shaped to curve in a manner that forms a natural arch and serves as support for the architecturally beautiful bridges. Even though the bridgework is hidden from sight since they are below the roads that go through the park, the spectacular and methodical work on the bridges is there to admire.

Meticulously built rock structures, still standing in the park, were once the foundations for large water towers. Natural rock steps that appear as if they have always been a part of the ecosystem lead visitors through the park and on trails leading to Lake Murray’s remarkable treasures.

The whole plan behind President Roosevelt’s New Deal program was to provide recreational opportunities for all Americans. As part of this mission, cabins and bunkhouses were built to provide shelter for those to enjoy their leisure time. Small, wooden cabins with fireplaces made from the same rock that shaped the park homes were constructed throughout the park. Bunkhouses were built to accommodate larger families and, similar to the main park buildings, large boulders and native stone provide rustic appeal as well as sturdy foundations, walls and fireplaces. One of the park’s most elaborate cabins once served as a large concession pavilion. This building has been enclosed and renovated to what is now the largest cabin, the popular retreat called the Colston Cabin.

Recreational opportunities at Lake Murray State Park also include group camps which accommodate adult and youth groups. Like the other structures, the cabins and recreation halls in the group camps are made of native materials including logs and uncut stone, allowing them to blend into the surroundings so as not to intrude on the beauty of the native land.

Because of the abundant number of historical structures at Lake Murray State Park, it is one of two state parks listed on the National Register of Historic Places, as is Robbers Cave State Park near Wilburton.

“The citizens of Oklahoma are fortunate to have the large number of National Park Service-designed CCC structures and park landscapes that remain at Lake Murray State Park,” according to Tourism Conservation and Planning Director Kris Marek. “Having recognized the national importance of these facilities, our job now must be to do whatever is within our power to preserve them for future generations.””