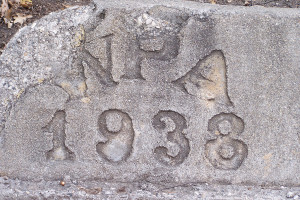 Source © Nevada Department of Parks and Recreation. All rights reserved.

From the North Dakota Parks and Recreation Department: “Nestled in the scenic Turtle Mountains on the shores of Lake Metigoshe, Lake Metigoshe State Park was constructed by the Works Progress Administration (WPA) in the 1930s and is one of the most popular year-round vacation spots in North Dakota.”

Several ND state parks have infrastructure within them that were built as a result of the New Deal programs, including Lake Metigoshe State Park.

The first 10 workers to show up to build this camp complex started in August 1934. By October, there were 50 men working onsite. Those workers were quartered near the fairgrounds in Bottineau, ND. By late August 1935 a lodge, dining hall and ice house reportedly stood completed. There were 75 men that inhabited the camp at this time. Most workers were unskilled laborers, but included masons, carpenters and an electrician. The focus of this plan was to build a lodge with an administration office and dorms. A lodge was built as well as a kitchen/dining hall. There was also a director’s cabin (which was moved and is now located near the entrance of the campground), a shop with laundry facilities and a garage. Additional plans included a hospital and stables, which were never constructed.

The Works Progress Administration left their mark in this area with the work they did. They also made a concrete memorial with “WPA 1938” within it. An application to the Civil Conservation Corps was sent in, but the CCC was dissolved before the application was approved. Therefore, the workers and equipment were distributed to other locations.

The kitchen/dining hall that you see in this area is the only building in the park that is original to the 1930s. Today, it is a popular place to hold weddings, family reunions, various camps and retreats.