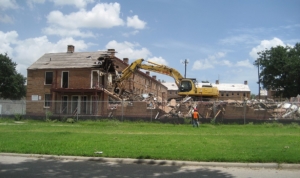 Lafitte project was constructed 1940-1941 and included 896 units. It was the fifth of six local housing units constructed in New Orleans following the Housing Act of 1937. The project was bounded by Lafitte Avenue, Orleans Avenue, North Claiborne and Avenue, and North Dorgenois Street. Architects were Sol Rosenthal, Jack J. H. Kessels, and Ernest W. Jones. R. P. Farnsworth and Company were the contractors for the $4,000,000 project. The units were built in a traditional New Orleans style townhouse with metal balconies and porch columns and railings. The project was originally slated for demolition in 1995 but postponed. It was closed following Hurricane Katrina and subsequently demolished in 2008. Similar to the other public housing projects in New Orleans, three buildings were retained. The renovated former administration building is now a Head Start and one residential building has been renovated, based on a Google maps 2019 street view. A second residential building remains, but is boarded up and has not been renovated.