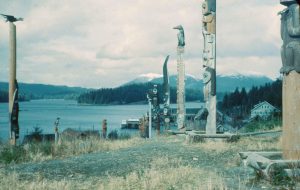 The Civilian Conservation Corps (CCC) developed the Klawock Totem Park on the Prince of Wales Island, between 1938 and 1940. The CCC selected 21 poles out of the approximately 142 Tlingit and Haida totems that were originally located in the village of Tuxekan. With the accord of the former residents of Tuxekan, the CCC moved the totems to the Klawock Totem Park. The carvings found at Tuxekan were commemorative poles. Unlike other old Native villages, Tuxekan did not have any house post carvings. According to Viola Garfield and Linn Forrest (1961), what also distinguished the carvings at Tuxecan was that they deviated from the “true totem poles” typology that depicted stories or historic events. The 21 totem poles at the Klawock Totem Park are originals and replicas. The master carver at Klawock was Johnney Prackovich.

The carvings at Klawock are distinct from the carvings of the Tlingit living in the southern regions. The carvings are less detailed, the figures are simplified, and the totems are smaller overall. Moreover, the undecorated portions of the poles are squared, in contrast to the more common rounded shape. These distinctive characteristics might be explained by the fact that the art of totem carving developed relatively late among the Tlingit living on the northwest side of the Prince of Wales Island. According to Garfield and Linn, no poles dated earlier than 1865 were found in this area. Moreover, the cedar forests of this region provided wood less suitable for pole carving.