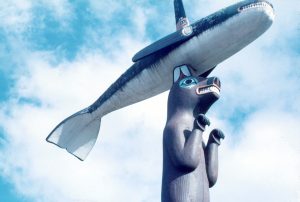 The Civilian Conservation Corps (CCC) restored/recarved the Blackfish and Brown Bear Pole between 1938 and 1940. The restoration was part of a larger U.S. Forest Service program focused on the conservation of totems and Native cultural assets. The pole was originally found at the abandoned village of Tuxekan. With the accord of the former residents, the CCC and the U.S. Forrest Service relocated the pole to the Klawock Totem Park on the Prince of Wales Island.

The figure of the Brown Bear suggests that this pole belonged to the members of the Wolf clan. The pole marks the resting place of a woman belonging to the clan. The blackfish measures twelve feet and forms a headdress for the bear figure. According to Viola Garfield and Linn Forrest (1961), the headdress represents the wooden hat worn by the deceased woman and other members of the clan. Painted with scenes illustrating legends and figures commonly represented on totem poles, these hats were ceremonial and worn during potlatches. Garfield and Forrest noted that no legend was identified and associated with the figures of this particular totem.