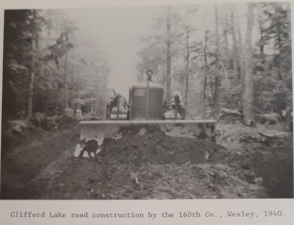 The Civilian Conservation Corps built the Kerwin Brook CCC Camp in the unincorporated area T36 MD BPP, in the vicinity of Wesley ME.

Excerpt from “In The Public Interest – The Civilian Conservation Corps In Maine” by Jon A. Schlenker, Norman A. Wetherington, Austin H. Wilkins.

In October 1939, the 160th Company moved from Stow, Maine to Wesley Maine to establish the Kerwin Brook Camp. During the months from July to August, the cadre erected four barracks, a kitchen and mess hall, officers’ and foreman’s quarters, washrooms and toilets, a classroom building, the headquarters building, forestry headquarters, a garage, and a workshop.

They dug a well, constructed a forty foot high water tower, and installed water lines from one end of the camp to the other. Lighting was provided by gasoline powered generators.

From the March 1941 edition of the camp newspaper, Forest Echo, we get an inside idea of the camp and the C.C.C. From the administrator’s point of view.

Lt. Charles W. Graham was the junior officer at the camp at that time. With regard to physical training, he urged that, “Every man should pride himself on his physical development. He should be conscious of the fact that he has reserve energy and physical stamina. An individual who has a well developed, strong body is enabled to face any situation with courage and confidence.

“Through physical training we will develop mental alertness as well as skill and strength. Exercise wisely used and adjusted will make a tremendous difference in each one of us. Physical training is an important part of our daily activities.”

The camp’s educational advisor in 1941 was Thomas W. Sherman. In his column in the Forest Echo he outlined the opportunities in the CCC for the enrollees:

“One of the major purposes of the C.C.C. Is to prepare you boys for work in outside jobs. Many of you have tried to find jobs without success. Maybe there was no work at all or maybe you were not experienced or trained in the jobs that could be had. Those of you that have met this situation should be glad to have the chance to get training and experience here in the C’s.

“Where could you find a person who would let you practice on his tractor, bulldozer, truck, dynamite or typewriter? Even if you did find one would he pay, feed, and clothe you until you learned? Would he spend his time patiently explaining the use and operation of some machine especially if he knew you were going to leave him soon after you learned?

“The opportunities are here for you. Take advantage of them. Attend classes. Watch the bulletin boards. Drop into my office with your problems. Let us help you to help yourself.”

The largest bridge yet built by the Work Crew of the 160th Company, P-68-Me., was recently completed. It will span the Machias River at the head of First Lake for a distance of 75 feet.
The bridge, a 2 span trucc [sic] support type, was erected under the supervision of the Technical Service.
Outstanding praise is given to George Ranney, Technical Service Foreman, and his enrollee crew of eight men for the excellent manner in which they executed the job.
Construction of the bridge lasted nearly three months, with almost all of the first two months being taken up in building the approaches and abutments.
Throughout its entire length the bridge is built of wooden timbers which were stained with creosote to prevent rotting.
The main span covers nearly all the distance across the river, while the minor one is an approach span which will be a big help in time of severe high floods to keep the water from damming up on the approaches.
This is the largest bridge on the Machias River Trail that has been built to date. Four other smaller bridges span brooks and rivers on the eight miles of road between the Airline and Fletcher Field. All have been constructed under the personal direction of Foreman, George Ranney.
Completion of the bridge will now enable the Technical Service to speed up their work on the other side of the Machias River.”

Upon inspection of the road and bridge sites, it seems that all of the CCC built bridges have been replaced by recently constructed steel and wood bridges.

The CCC was established by Congress in March 1933. Eleven camps were set up in Maine in the same year; two were in Washington County. The Beddington camp was closed in 1935 and the Princeton camp, really in Indian Township closed in 1942 when the program was shut down. In 1940 a sub-camp of Princeton opened at Wesley where men did a biological survey. The program was to give work to men 18 – 25 during the Great Depression. Their jobs ranged from fire fighting, fire protection, repairing fire lookout towers and the camps where the fire spotters stayed. They maintained the telephone connections among the towers and built or upgraded miles of trails and roads through the woods. Some of these roads still carry the name CCC. 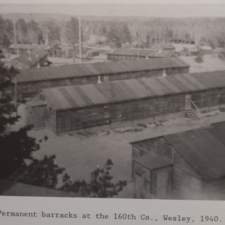 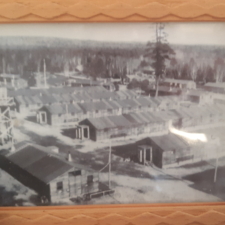 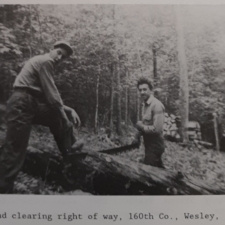