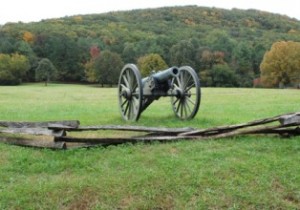 From the summer of 1938 to early 1942, Civilian Conservation Corps Camp NP-4 provided improvements to the Kennesaw Mountain National Battlefield Park. During its operation, the camp’s enrollees cut trails and roads, implemented fire suppression measures, improved erosion control at the site, planted tress, and constructed the park’s first headquarters building. The camp contained barracks, a recreation center and library, a mess hall, and several vocational education buildings. Though much of the physical campsite was disassembled and re-used for the war effort, the landscape constructed by the CCC is still extant.