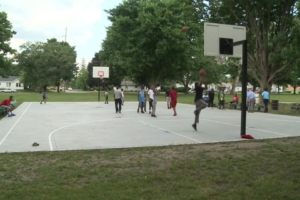 The National Youth Administration (NYA) pursued improvements at South Bend’s Kennedy Park in 1939. The park was known as Bendix Park during the New Deal.

“Plans for beautifying Bendix Park are being completed by the board of park commissioners of South Bend, Ind.,” a reporter noted in April 1939. “The board hopes to transform the bare land into one of the City’s beauty spots by next summer. The park will be landscaped around the NYA building, which is being financed jointly by the NYA and the park department as a city recreation center. Plans for landscaping include an experimental garden in which shrubs and trees, never before grown in local parks, will be planted.”

The park has been renovated several times since the NYA’s efforts. As of 2006, the NYA workshop building – built by NYA teams in 1939 – was still extant.