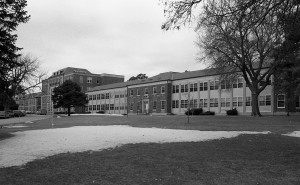 In November 1937, the State Board of Control decided to proceed with construction of a new men’s hospital building at the State Tuberculosis Hospital in Kearney. The building was estimated to cost $125,000.00, the bulk of which would be funded out of the unicameral’s “building fund” for state institutions. Officials were hopeful that they building could be completed by the fall of 1938. John Latenser and Sons, Omaha architects, were selected to prepare the plans for the building. The Latensers had experience in designing hospitals, including the University Hospital, the Douglas County Hospital, Clarkson Hospital, Lord Lister Hospital, Clearview Home and others. The board hoped the new building would help relieve crowding pressures in the current building by adding forty beds, as well as an operating room, X ray room, and other special rooms. Dr. L. T. Sidwell, superintendent, stated,

“We really do need that additional space, and we appreciate the cooperation of the board in helping us meet the problem. The building will not only relieve crowding and increase our capacity, but it will also enable us to give our patients better service.”

In March, the State Board of Control announced that bids for the construction of the building would be opened on April 14th. By March, plans called for sixty-six additional beds instead of the original forty, as well as operating room, X ray room, and sun rooms. The building would be a two story brick and concrete structure. In June, the Daily Hub announced that PWA funding was being sought to help pay for the new hospital, which would allow for the construction of additional space and facilities. By this time the project included seventy-two beds in the men’s hospital.

The low bids for the men’s building were awarded in December 1938 as follows: general construction to Hageman Construction Company of Hastings, plumbing and heating to P&L Seifert of Norfolk, and electrical work to Rapid Electric Company of Rapid City, SD. The work on the excavation of the site proceeded quickly through the winter. Excavation work was subcontracted to John Wisnieski of Dodge, who used ten men, three tractors and a team. Work on the excavation was expected to be finished by mid-January, after which the footings would be laid.

The plans had again altered slightly in orientation. The 1923 two-story building would become the east wing of the new building. The central portion of the building would consist of four stories: one for men, one for women, one for administration offices and one for medical services. The new men’s west wing building would mirror the east wing fairly closely in scale, but would also have two freight elevators for moving patients. The original 1923 building had no elevators, so the new buildings would add convenience as well as space.

By June, the west wing was almost ready for its roof, and the four story central portion was completed to the third story. On average, at least forty men were working on the project at any given time. Nevertheless, the project was expected to continue until the early part of 1940. In September, the building was largely ready for plastering, with the exception of roofline cracking on the parapet wall that was feared would spread before it was corrected.