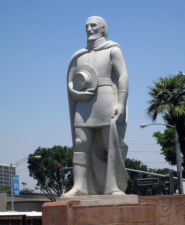 Located at the southeast corner of Fourteenth Street and Magnolia Avenue in Riverside, California is the Juan Bautista De Anza statue, created by Sherry Peticolas with WPA support. The Riverside Art Association, which sponsored the project, donated $5,000 and the rest of the cost was paid for with federal funds. The space in Newman Park was provided by the city, and Riverside resident Ed J. Loustaunau, a great-great-great-great-grandnephew of De Anza posed for the statue, since he was thought to resemble an old portrait of De Anza himself. Because of the unstable nature of the land where it is located, the statue goes fourteen feet into the ground. It has a masonry wall behind it which depicts “the start of the second, colonizing, expedition.”

A bronze plaque near the sculpture reads:

Spanish Explorer Don Juan Bautista de Anza is the first European known to visit the area now known as Riverside. He passed thru the region in 1774, and, again, in 1775-1776 while seeking an overland route from Sonora, Mexico to the San Francisco Bay. This Statue was sponsored by the Federal Works Projects Administration, which funded public improvements in order to create jobs during the Great Depression. Ed J. Loustanuau, a descendant of De Anza’s Brother, was the model.

Cultural Heritage Board Landmark No. 73 City of Riverside

Project originally submitted by Douglass Halvorsen on May 18, 2022.