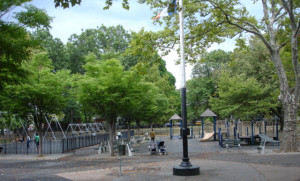 A June 1936 press release announced the opening of a new playground in Canarsie Park “fully equipped with play apparatus for young and older children.”

The NYC Parks site confirms this date and explains the history of this site:

“Located at East 93rd Street and Seaview Avenue, this playground is situated in the northeastern part of Canarsie Park, which takes its name from the Canarsie Indians who once lived there. It stands on the oldest parcel of land, acquired in 1895 by the City of Brooklyn and transferred to Parks in 1898, in the 132 acre park which is bounded by Paedergat Basin, Fresh Creek Basin, Seaview Avenue, and Shore Parkway, and lies adjacent to the Belt Parkway. The playground was built in 1936.

Although the 1936 press release does not mention the WPA or other New Deal agencies, researcher Frank da Cruz explains here that almost all New York City Parks Department projects between 1934 and 1943 were carried out with New Deal funds and/or labor, and that after April 1935, the WPA quickly became the main source of this support.