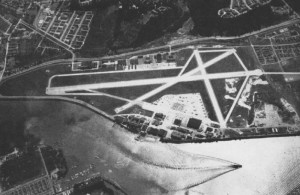 U.S. Naval Aviation News November 1947. This file is a work of a sailor or employee of the U.S. Navy, taken or made as part of that person's official duties. As a work of the U.S. federal government, the image is in the public domain.

From 1933 to 1942, New Deal agencies were busy at the two older facilities, making improvements of various kinds.  Much of the work concerned the improvement of the Anacostia Naval Air Station, in the northern portion of the present joint base.

In 1933-34, the Civil Works Administration (CWA) repaired the landing beach, painted buildings, and constructed squash courts at the Naval Air base.

Then, after the floods of 1936, the Army Corps of Engineers was brought in to aid with flood control: “At the Naval Air Station, Anacostia, D.C., a large amount of repair and improvement work was carried on during the fiscal year 1936. Owing to the high water in the Potomac in the spring of 1936, and the resulting damage, it became necessary to make arrangements to prevent a recurrence of that damage. Under the direction of the United States Army Engineers, the area was partially protected by the construction of a levee along the waterfront. In order to make the closure complete without interfering with the operation of seaplanes at the station, arrangements are now being completed for portable units to make the entire area immune from the results of floodwaters.”

In 1940-41, it was the Works Progress Administration’s turn.  The WPA did a broad swath of improvements, according to project cards at the National Archives listing the kinds of tasks approved.  While not all this work can be confirmed, much of it was certainly completed, judging from reports in the Washington Post that stated the works had cost $663,000.  They included improvements to runways and roads, water and electric systems, buildings and roads, and much more.

Here are the detailed descriptions of work on WPA cards:

Project originally submitted by Brent McKee on May 27, 2013.
Additional contributions by Richard A Walker.