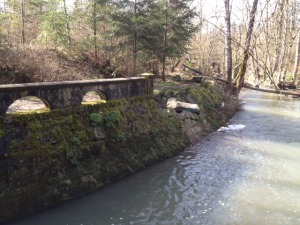 Three different federal relief agencies took on the challenge of Johnson Creek’s annual flooding during the New Deal period, beginning with Oregon’s SERA (State Emergency Relief Agency) efforts. Responsibility for the project was transferred to the PWA (Public Works Administration) in 1935 and ultimately to the WPA (Works Progress Administration) in 1936. The Oregonian, Portland’s primary newspaper, noted in 1935 that the Johnson Creek flood control project would become one of the largest projects in the area as workers attempted “to curb the unruly stream” that caused thousands of dollars of damage every year. Over several miles of the creek, workers labored on the streambed, realigning and rip-rapping the banks. The WPA workers from Multnomah and Clackamas counties also quarried local rock to use in the project.

Remnants of the flood control project’s rockwork can still be seen in the City of Portland’s Tideman-Johnson Park.