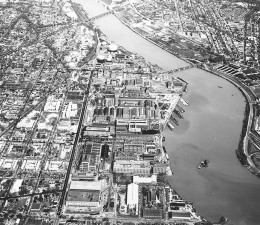 View of the Navy Yard and its vicinity, looking eastward from over the South Capitol Street area, circa 1960. The Anacostia River runs diagonally from lower left to upper right center, crossed by the Eleventh Street Bridge (in center) and the Sousa Bridge (Pennsylvania Avenue) near the top.

The John Philip Sousa Bridge carries Pennsylvania Avenue across the Anacostia River in Washington, D.C.  It was built in 1939-40 during the New Deal and named after the famous American marching band composer, who grew up nearby.

Agitation for a new bridge began in earnest in 1934 but met continuing opposition in Congress throughout the decade (DC government is officially a creature of the federal government).  Funds for a new bridge finally won approval in 1938 and were included as part of the District of Columbia Commissioners allocation in the federal budget of that year.

The first span opened in late 1939 and the second span (where the old bridge had stood) was dedicated in early 1941.