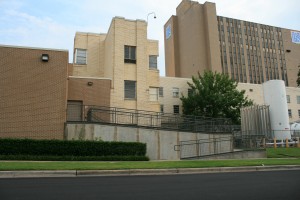 Originally the City-County Hospital, this facility was constructed in Fort Worth, Texas in 1938-1939 in a design that reflected both Classical Moderne and Streamlined Moderne styles. Fort Worth architect Wiley G. Clarkson designed the building and the general contractor was Gurley Construction Company. It had a 185-bed capacity, with an isolation section for communicable diseases with 20 additional beds. It also had three air-conditioned operating rooms, a laundry, pharmacy, and X-ray room. Built during the era of segregation, it had separate entrances for whites and blacks on the front of the building. The cost of the PWA-funded facility was $475,000 (Project # W1441).
In 1954, the hospital’s name was changed to John Peter Smith Hospital in honor of the Fort Worth pioneer. In 1877, Peter Smith donated a tract of land to the city in the hopes that a hospital would be built on it. At the time of the gift, the land was far south of the city limits.
The original hospital has been mostly obscured by later additions. Glimpses of the building can be seen on the north side of the hospital.