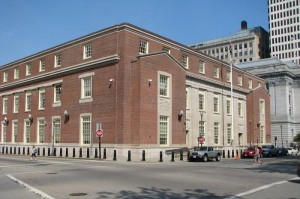 This New Deal Art Deco building was originally constructed as the “post office annex” to the 1908 Federal Building and Courthouse next door. The building still functions as both a post office and a general federal building housing various federal offices. Note: Though the GSA document cited below says the building was WPA, such buildings were almost always PWA. The two agencies have often been confused.

From the U.S. General Services Administration:

“By the late 1920s, the need for additional space again became urgent. The city selected a site adjacent to the 1908 Federal Building and U.S. Courthouse. A local architectural firm, Jackson, Robertson & Adams, received the commission to design an annex to the Beaux Arts building. This firm also had designed the Providence County Courthouse, an addition to City Hall, the State Office Building, and the Rhode Island State Airport Terminal at Hillsgrove. Cornerstone laying ceremonies took place in September 1939. The post office annex, as it was then called, was completed by May 1940 at a cost of $896,000.

The U.S. General Services Administration acquired the building in 1961. Renamed in 1977 for former Governor and U.S. Senator John O. Pastore, the building was listed in the National Register in 1984 as a contributing building to the Downtown Providence Historic District…

A product of the New Deal-era Works Progress Administration (WPA), the three-story Pastore Federal Building is an example of Stripped Classical architectural style, with Art Deco elements. The Stripped Classical style features classical design tenets, such as symmetry and historical references in ornamentation, but is simple in its execution. Art Deco is noted for low-relief geometrical designs, accents in terra cotta and glass, and exterior wall coverings such as concrete, smooth-faced stone, and metal.

The building’s exterior materials are red brick and limestone, with a granite base. A two-story, five-bay limestone frontispiece graces the east facade. A granite balustrade extends between the two entries, while a concrete and granite ramp was added to the south entrance in 1983…

Cast concrete sculptures on the facade were created by artist Raymond Barger, a Maryland native who studied at the Carnegie Institute and Yale. Completed in 1940, the carved sculptures were executed under the WPA’s federal art program. The sculptures above the two main entrances depict stylized eagles. On the projecting pavilions, the sculptures consist of the head and torso of human figures, a sun or moon and stars, and illustrations of different means of delivering mail.” 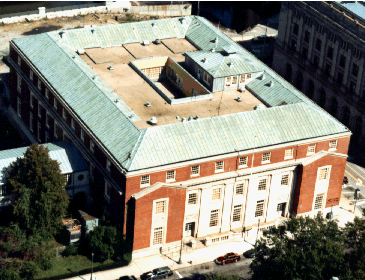