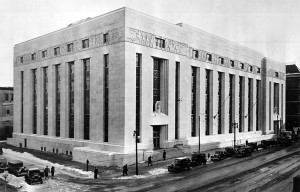 “The architects completed their plans in 1931 and the following year, the government awarded the construction contract to Kenny Brothers, Inc., of New York City. Prominent officials and the public gathered for a cornerstone-laying ceremony on August 18, 1933, and construction was completed in 1934. The building had an exterior bridge connecting the nearby rail station with the post office, which occupied the entire first two floors.” (gsa.gov)