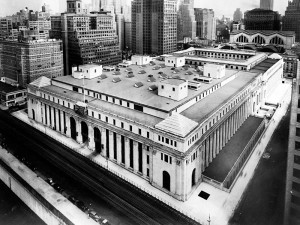 The colossal James Farley Post Office Building, so named in 1982, is home to the Main Post Office of New York, NY. The building was originally constructed in 1912, facing Eighth Avenue; a 1934-6 Treasury Department-funded addition doubled the size of the building and extended it to Ninth Avenue. Hence, the building now occupies two full New York City blocks: 8th to 9th Ave. from 31st to 33rd Street.

With most of the mail processing operations now located at the Postal Service’s Morgan Annex facility, most of the Farley Building is presently under construction, slated to become the planned Moynihan Station train station.