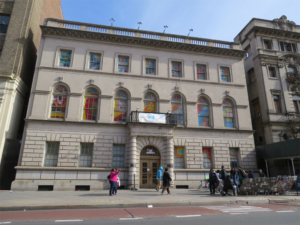 The federal Works Progress Administration worked to conduct repairs and alterations to several civic buildings in Queens as part of a $300,464 project begun in 1935. The project included the construction of an addition to what was the Registers Building in Jamaica, NY.

From Wikipedia: “Office of the Register, also known as Queens Register of Titles and Deeds Building, is a historic government building located in the Jamaica section of the New York City borough of Queens. It was built between 1895 and 1913 and is an imposing, three-story building with a limestone facade in the Neo-Italian Renaissance style. A rear five-story addition was built in 1938. The facade features deep rustication on the first floor and a smooth ashlar surface above. The building housed the Office of the Register until 1974, after which it became the Jamaica Center for Arts & Learning (JCAL).”

The building became listed on the National Register of Historic Places in 1980.