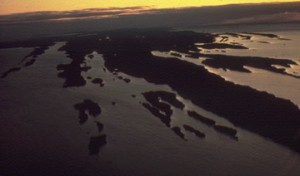 “In August 1935, the the first members of Company 2699 of the Civilian Conservation Corps (CCC) arrived on Isle Royale… The CCC, made up of very young men, spent seven summers as the manpower that constructed much of the young park’s infrastructure. They built the park headquarters on Mott Island, created boat campgrounds, and improved the few resorts that the park service had selected to retain. They also erected a fire tower and constructed miles of trails.”