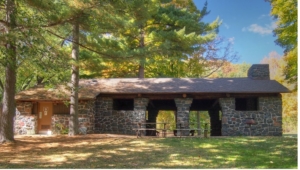 “The ten CCC/WPA/Rustic Style historic resources at Interstate State Park are included in two historic districts: a six-acre area known as Glacial Gardens and a 22-acre campground. The park buildings and structures were constructed of local basalt stone, which was probably quarried near the boundary of the park at a site where Highway 8 cut through a section of rock in 1931. A CCC crew may have quarried the stone for the WPA. Architects for the buildings and structures built by the WPA were from the National Park Service and the Design Office of the Minnesota Division of State Parks.

Both the historic district and the campground in Interstate State Park contain exceptional examples of finely-crafted Rustic Style construction featuring native basalt rock quarried from within the park. The functional division of the park into the Glacial Gardens and the Campground, located one mile to the south, is a significant example of landscape design based on National Park Service master planning. The areas were logically designed, based on the type of users and their possible activities, in order to avoid congestion and overcrowding caused by undifferentiated space.

The design of the buildings in the campground area was influenced by the Rustic Style construction in the Glacial Gardens section of the park. The Men’s Rest Room in particular is significant for its sensitive placement within the rocky outcroppings of the existing landscape. Of particular interest is the visual appearance of the Combination Building, which was based on a design first used at Whitewater State Park. The use of a different type of stone in each of these nearly identical buildings clearly demonstrates the variety of effects that could be achieved by a change in native building materials…

Interstate State Park is one of the oldest parks in the state. Established in 1895 when Minnesota and Wisconsin created separate interstate parks across from each other on the St. Croix River, this was the first example of an interstate collaboration in the country. During the late 1930s, Interstate State Park received the highest number of visitors of any park in the state — 327,496 in 1937 alone. This was comparable to the attendance at several National Parks” (Minnesota Historical Society).