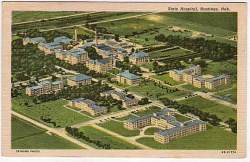 In November 1935, federal Public Works Administration (PWA) Administrator Harold Ickes allotted $237,200.00 to the Hastings State Hospital for three units in the institution’s building plans. Together with the $290,000.00 provided by the state legislature, the allotment raised the total amount of funds to be spent to $527,200.00 for the construction of a new hospital building, a building for the night watch, and a sewage disposal plant. Kenneth Gedney was hired to be the architect for these improvements.

Bids were called in December 1935. The bid for excavating the basement of the night watch building was given to F. C. Hageman of Hastings, and later he received the contract for building the structure itself. Bids for construction of the cottage and the sanitary sewer were requested for March. The sewer project contract was i given to the Central Bridge and Construction Company of Wahoo, which submitted the low bid. Prior to the construction of the sewer, hospital sewage dumped into a small stream near the hospital, causing copious numbers of complaints among area farmers.

In June 1936, John Latenser, Jr., State Public Works Administration Director stated that work to alleviate overcrowding issues at Ingleside State Hospital would likely begin by the end of the month. Prior to the construction project, Ingleside was host to a peak population of 1,738 patients, although it was designed to house far fewer. The new additions would allow the hospital to provide quarters for 2,500. On average, it was expected that 407 skilled and unskilled laborers would be employed on the project each day.

In the winter of 1936, it became obvious that Ingleside had other, perhaps more pressing, issues. The Hastings Daily Tribune began publishing photographs of the four story main building, and the damage that was beginning to get worse by the day. Hundreds of bricks had tumbled from spots around the roofline. Walls began to bulge. A crack appeared in the cornice joint. It became obvious the hospital building was pulling itself apart. Although the building was only fifty years old, the bricks had been fabricated on location from the clay around the hospital, and some of them had not been fired properly. Some were as soft as the clay you could still find around the grounds. The patients desperately needed to be removed from the building, but there was no place to put them. The other hospitals were equally full. In December, Governor R. L. Cochran visited the hospital to inspect the main building. He left promising to speak on the project’s behalf to the legislature. The governor recommended an immediate $200,000.00 appropriation for Ingleside, and a quick application for a PWA grant. Days later, the main building experienced a small fire, which was not enough to cause much damage, but did frighten administrators and politicians.

Early in December, a new 300-patient ward building was approved by the PWA. This building would not replace the main building, as the project had been underway for some time before the damage was observed. The new building would cost an anticipated $300,000.00, and the state legislature had set aside two thirds of that amount for this purpose. Bids were to be let on this previously approved ward hospital in January. Contractor F. C. Hageman was given the contract for the job. The project was expected to cost $75,000.00 for labor. The building was built north of the new employee’s buildings and would face west.