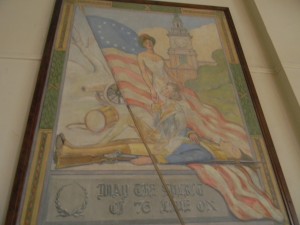 The Federal Arts Project section of the New Deal Program employed men and women with different artistic talents for depictions of American life that would be on display in federal buildings and newly built buildings. Although the Independence Park field house, (located at 3945 N. Springfield) was not a new development (it was built in 1914), a WPA painting by M.R Decker was created for display in the field house auditorium in 1937, a few years after the 22 independent park agencies of Chicago formed to become the Chicago Park District. This painting is entitled “Spirit of 1776”, and depicts 2 union soldiers, one holding the hand of a woman in white with a crown of flowers around her head, and the other lying dead with his hand over his heart, all while the American flag is waving in the background. The words “May the Spirit of ’76 Live On” adorn the bottom of the painting. This historic painting’s recent conservation cost The Chicago Conservation Center $18,000.