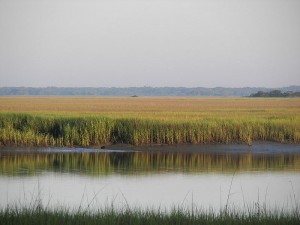 “Hunting Island is a 5,000-acre (20 km2) secluded semitropical barrier island located about 15 miles (24 km) east of Beaufort, South Carolina. It is the most-visited state park in South Carolina and is a part of the ACE Basin estuarine reserve area. It is one of the Sea Islands. Among the various natural activities, the park is also known for its 19th century lighthouse which bears its name…

In the 1930s, the island was developed into a state park by the Civilian Conservation Corps as bridges were constructed to connect the outer Sea Islands with Beaufort. Despite the limited human development, the island remains a preserve for its abundant wildlife. Visitors enjoy more than 4 miles (6.4 km) of beach, a dense maritime forest in the interior areas, and an extensive saltwater marsh on the western side. The most notable attraction is the 19th-century lighthouse, listed on the National Register of Historic Places.”