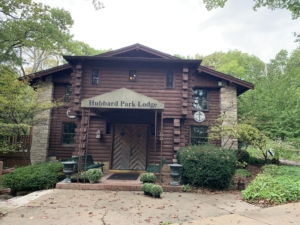 The Works Progress Administration (WPA) built the Hubbard Park Lodge in Shorewood WI. the structure was built for use by Boy Scouts and Girl Scouts.

According to one history, “Hubbard Park saw a lull in activity until the 1930s when Shorewood secured about $2,650,000 for public works projects in the village, primarily through the Federal Works Progress Administration (WPA) intended to work the country out of depression.”

“This is when Hubbard Park Lodge was built, as a cabin for boy and girl scouts. There was also a community lodge, pavilion and warming house for ice-skating.”

Hubbard Park Lodge, originally called the Scout Craft Cabin, was designed by a WPA architect named Henry C. Engels. Its original use was by the Boy Scouts and Girl Scouts. For many decades, it has been used as a restaurant for special events and the general public. Here’s is the restaurant’s current website.

According to the Wisconsin Historical Society, “The Hubbard Park Lodge was constructed in 1936 in a Rustic Style following a design by Wisconsin architect Henry C. Hengels. This 2-story building is rectangular in plan with log walls comprising the front façade and brick walls (both cream and red brick) comprising the side and rear elevations. The building features an asphalt-shingled gable roof with vertical board siding and L-braces under the gables. The primary elevation faces south and is symmetrical in plan with a projecting, hipped-roof center bay. The center bay contains a pair of doors with herringbone-patterned paneling. Both front corners of the main building mass are detailed with stone veneer that spans the full height of the walls. A newer deck is located off of the west elevation overlooking the river and is accessed by two pairs of French doors. Windows are multi-pane double-hung, multi-pane casement, and glass block. Four heavy chimneys of stone and brick construction project from the roof at various points.”

Excerpt from the Village of Shorewood: “Within the woods at the north end of the park stands the charming and rustic Hubbard Park Lodge. The building, constructed as a WPA project by the FDR administration, is home to Hubbard Park Lodge Restaurant.” 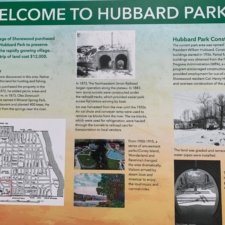 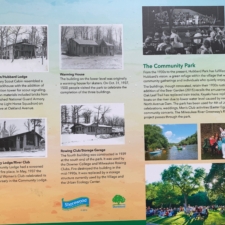