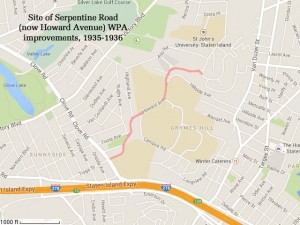 The federal Work Projects Administration put many men to work starting in 1935 with Staten Island street repair and maintenance projects along roads throughout the borough. One project involved the widening and paving of what was then known as Serpentine Road, now a part of Howard Avenue, in the Grymes Hill section of Staten Island. Additional work on the 4,000-foot stretch between Clove Road and [then-]Howard Avenue (now, about the intersection of Howard Avenue and Signal Hill Road) involved “reducing the curvature” to make bends less dangerous. (This was, after all, Serpentine Road!)