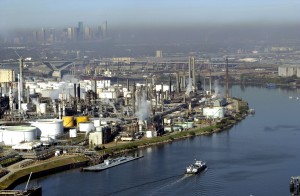 The Houston Ship Channel officially opened in 1914 after the 52-mile long waterway that runs from the Gulf of Mexico to a tuning basin at the Port of Houston was dredged to a depth of 25 feet. The depth of the channel was increased to 30 feet in 1922.

In 1933, the United States Department of War and the United States House Committee on Rivers and Harbors approved a plan to increase the depth of the channel from 30 feet to 34 feet and widen the Galveston Bay section from 250 feet to 400 feet. The Public Works Administration provided $2,800,000 dollars for the project, which completed in late 1935.

As of 2014, the dimensions of the Houston Ship Channel are 530 feet in width and 45 feet in depth. The channel is estimated to have an annual economic impact to the State of Texas of $178.5 billion.