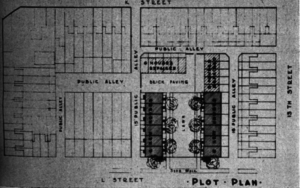 The 1934 Alley Dwelling Act funded “slum” rehabilitation efforts in the District of Columbia. Though the Alley Dwelling Agency was initially underfunded, the Works Progress Administration (WPA) was called upon to carry out its program. This is similar to how the New Deal continued the urban renewal plans in the Federal Triangle area and in the lower Rock Creek area, but did not originate these policies.

One such project was London Court, a cluster of informal housing in the district’s southeastern quadrant, at the block bounded by L, K, 12th, and 13th Streets. The area had been originally settled in the postbellum period by former slaves.  It was regarded as cramped and squalid by authorities, though all such evaluations by white authorities have to be taken with a grain of salt.

Nevertheless, the London Court project was a notable contrast to the common pattern in which ‘blighted’ housing was rarely upgraded and simply demolished in favor of massive federal buildings or tower housing blocks.  In this case, rehabilitated housing was integrated with new housing construction.

Work: A Journal of Progress outlined in detail the work undertaken at the London Court site:

“1. Construction of 12 new low-rent, row-type dwellings;
2. Reconditioning 11 existing low-rent, row-type dwellings;
3. Construction of 16 one-car, concrete-block storage garages as a community alley reclamation development;
4. Repairing two nonresidential alley buildings bought by the Authority to round out its acquisitions within an alley;
5. Clearing inflammable and unsightly trash from alley properties purchased by the Authority, pending demolition;
6. Grading and preparing a lot bought by the Authority and temporarily used as a public school garden;
7. Maintenance of sod, shrubbery and embankments on a parking lot developed by the Authority on the site of three inhabited alleys.

In this project the Authority has retained the eleven existing dwellings, but has effaced their characteristics as alley houses by integrating them with the new construction and opening them to the street. The old houses are being reconditioned so as to conform with acceptable housing standards. In their completed state the old and new dwellings will form a three-sided development, facing on a central grass plot. These dwellings are intended to compensate in part for alley houses which the Authority has demolished in other squares, and which have been supplanted by slum reclamation projects of a nonresidential nature. The new construction is now in the last stages of completion, and the reconditioning is more than half completed. The houses will be rented to Negro families, and will be managed by the Authority.” (Work 1936, p. 28)

Based on Google Street View and satellite imagery, some renovated houses along K Street appear to be extant and well-appointed, but those closer to the intersection of 12th and K, as well as those closer to 13th and L, were demolished some time ago and replaced by a large apartment building. From 1960 to 1974, the construction of a spur of I-695 connecting the 11th Street Bridge and the Pennsylvania Avenue Bridge clipped off the southern edge of the block and appears to have eliminated most of the new-built WPA housing. The highway spur is currently being removed, which may signal a re-evaluation of the area and potentially the appreciation of the houses on K Street as part of the New Deal Legacy.

The 12 new and reconditioned homes constructed in 1935-1936 by the New Deal’s Alley Dwelling Authority (ADA) were located in the block bounded by K, L, 12th, and 13th streets. Today, the DC Housing Authority manages “Hopkins Apartments,” a much larger set of public housing buildings located at the original Hopkins Place site as well as nearby blocks.

The ADA was one of the earliest New Deal initiatives to provide better housing for low-income Americans. It existed from 1934-1943 as a federally controlled special authority. It then slowly evolved into today’s DC Housing Authority, an independent agency of the DC Government. 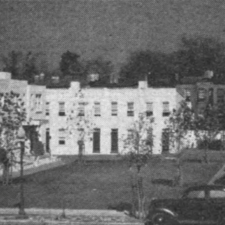 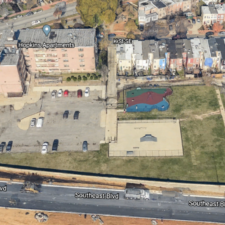 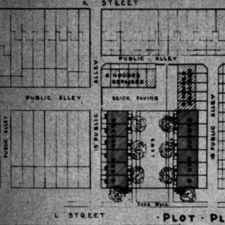