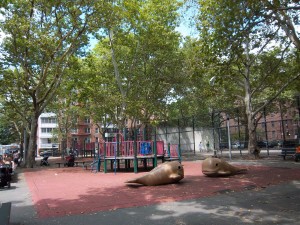 The New York Times reported that WPA laborers had begun work in late 1941 on a playground consisting of “two and one-third acres … The facilities will include a brick comfort station, concrete wading pool, irrigated sandpit and mothers’ sitting area, swings, slides, handball court, pipe-frame exercising unit, and areas for skating, basketball and softball.”

The completion of the project was announced in June 1942.