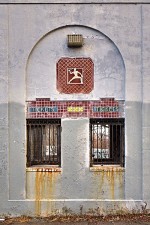 A photograph showing the once elaborate art at the stadium, wasting away with neglect.

Many workers laid off from the mills found work under a New Deal-financed program to provide enhancements to the stadium in 1932–34.” (Wikipedia) [Note: The New Deal started in 1933.]

This huge stadium is in serious disrepair now, but still has that classic 1930s look to it. It is most significant for its important role in African American history.