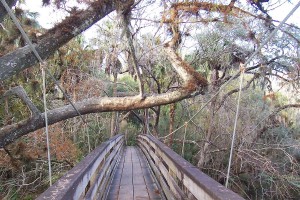 “Opened in 1938, Hillsborough River State Park is one of Florida’s first state parks; this original CCC Park is divided by the swiftly flowing Hillsborough River with a set of Class II rapids. The river provides opportunities for fishing, canoeing, and kayaking…”   (www.floridastateparks.org)

Pictured here is a CCC built wire suspension footbridge over the Hillsborough river (constructed in 1936).