In 1934, the National Industrial Recovery Act (NIRA) financed the construction of the first continuous highway across the city of Santa Barbara (roughly six miles), taking through traffic off city streets.  The route followed the Southern Pacific tracks. Along the new route, Mission Creek was channelized and several new bridges were built.

At the time, it was called “the Roosevelt Highway”, but was an extension of what was then commonly known as the Pacific Coast Highway.  Although Gibson (1934) attributes the funding to the NIRA, it was almost surely the Public Works Administration (PWA) – which was created as one part of the National Industrial Recovery Act in 1933. The cost was over one-half million dollars.

Today, the highway is State Route 1 and Interstate 101.  While it seems to follow the route built in the 1930s, it has been altered by subsequent expansions by the state department of highway.  It is not clear what – if any – portions of the New Deal era work remain.

The District Engineer provided a detailed description of the work in a 1934 article, which is worth quoting at length:

“…when entering Santa Barbara from the south along the old highway, one was first confronted by a narrow underpass under the Southern Pacific tracks, where the grade is steep and the alignment on a 360-foot radius curve. A short distance farther on, the traveler again crossed under the railroad, under almost equally dangerous conditions; and then proceeded along various city streets around no less than five right-angle turns, and then followed northerly along De la Vina Street, Hollister Avenue and out of the city on the north. De la Vina Street is very narrow and its congested condition has always been an annoyance to the traveller.

Finally, a route, closely paralleling the Southern Pacific railroad was adopted, which involved a total construction of 5.9 miles of highway, together with two steel and timber bridges over Mission Creek, a reinforced concrete overhead structure over the present highway, and a similar type structure to carry a county highway over the new road.

The new alignment has a graded roadbed width of 46 and 56 feet along the lie alignment, and 76 feet in width where contiguous with existing city streets with surfacing 30 feet wide throughout, and all structures are being built to accommodate future widening. The surfacing section is somewhat modified from general practice and consists of a 30 foot unreinforccd Class “C” Portland cement concrete base topped with 21 inches of asphalt concrete. The asphalt concrete specifications have been drawn up stipulating the use of Carpinteria asphalt sand, which is a local product….

….The two bridges being built across Mission Creek provide a clear roadway width of 60 feet with two 4 foot sidewalks. At the northerly edge of the city, where the new road parallels the railroad, it has been necessary to construct a reinforced concrete girder type overhead structure to carry a well traveled county road, this structure directly connecting to an existing timber bridge over the Southern Pacific rail road….

The roadway work is progressing under two contracts and the structures under three contracts, all work being under the provisions of the National Industrial Recovery Act, stipulating a maximum employment of Santa Barbara County workmen, and providing for a 30 hour working week. The entire improvement on this Santa Barbara through truck boulevard aggregates a total contract price of over $500,000, and when opened, which is expected, will be about November 1st.” 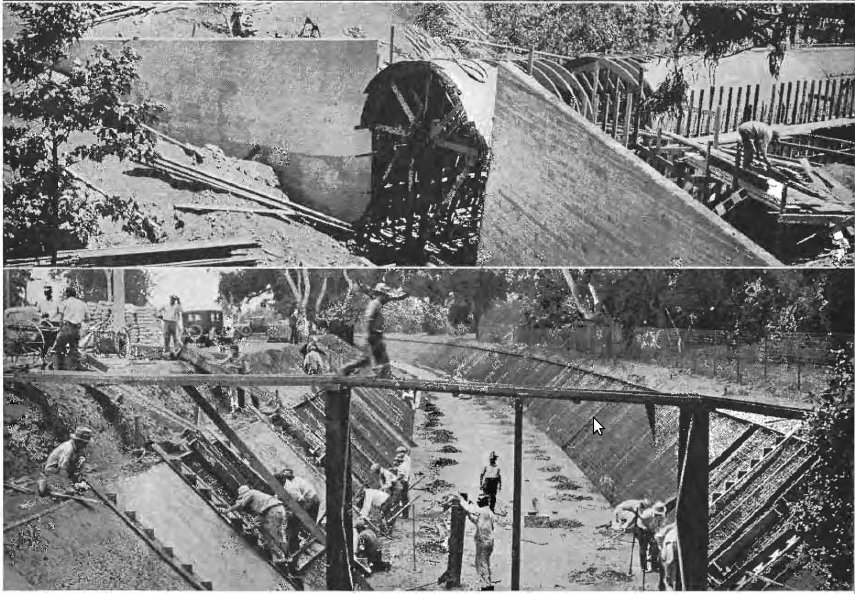 Location notes: Location on the highway roughly midway across the city