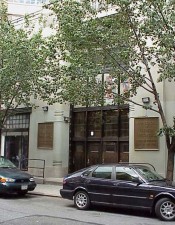 What is now the High School of Fashion Industries began in the 1920s as a vocational program in a garment center loft on West 31 Street. It was intended to train a work force for New York’s large garment industry, and most early students were first or second generation immigrants.

In 1938, the WPA helped build a new campus for the what was then called the Central High School of Needle Trades. The school was completed in 1941. The school’s current website explains that “It’s curriculum was almost entirely vocational, stressing sewing, machine work, and fashion design. It had many ties to the labor movement in New York, as illustrated in the landmark murals in the auditorium.”

The New York Times wrote of the building’s opening:

The largest [of the new schools completed] is a twelve-stry building that will house the Central High School of Needle Trades at 225 West Twenty-fourth Street. This building has sixty-five shops and special rooms, ten regular classrooms and six laboratories in which will be taught all branches of tailoring, costume design, millinery design, dressmaking, shoe manufacturing, fur processing and allied subjects.

The high school was planned in co-operation with representatives of industry and is located in the garment district. The auditorium of the new building, seating 1,600 persons, is decorated with murals depicting the life of Andrew Johnson, seventeenth President of the United States, who was a tailor.

The school took on its new name in 1956. Its curriculum has continued to change with the times. At different moments, it has offered classes in everything from “fur manufacturing, haberdashery, upholstery, [and] shoe manufacture,” to, today, “Fashion Design, Fashion Merchandising, Visual Merchandising, Textile and Interior Design, Illustration and Graphics, or Jewelry Design.”