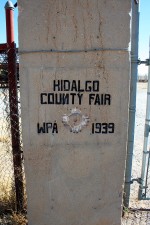 “When Franklin D. Roosevelt took presidential office in 1933, the Great Depression was in its fourth year. He was elected partly because he promised relief for the common man. He enacted the New Deal programs and the Works Progress Administration, which was later called Works Project Administration. The program put unemployed men to work in all areas of the county to build strength and self-respect in the working class. The projects, both in the process of putting people to work and in the resulting buildings, greatly impacted the suffering nation and especially the Southwest, which was also in a severe drought…