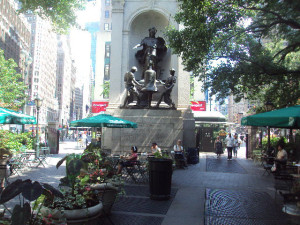 In 1940, the WPA rehabilitated the “hourglass” intersection formed by Broadway, 6th Ave., 35th St. and 32nd St, the north end of which is known as Herald Square and the south end as Greeley Square. The project centered around the restoration and re-placing of a large sculptured clock originally constructed by Antoin Jean Carles in the late 1800s. The Parks press release announcing the completion of this work was especially long and enthusiastic:

“The rehabilitation of the hour-glass intersection of Broadway and Sixth Avenue extending from 32nd Street to 35th Street is now completed. Elevated structures, and surface car tracks have been removed, building fronts cleaned, streets and sidewalks repaved and park areas rebuilt.

Herald and Greeley Squares, the bulbs of the hour-glass, have been redesigned and reconstructed. Greeley Square, which lies at the south end of the improved area, has been planted and paved in a manner similar to Herald Square. Within it has been relocated the seated figure of Horace Greeley facing north and framed by 4 Hawthorne trees.

The old Herald Square, bounded by Broadway, Sixth Avenue and 35th Street, has been enlarged on the Sixth Avenue and Broadway aides to provide an adequate setting for the new 50 foot granite monument housing Minerva and the Bell Ringers…

The monument, of modified Italian Renaissance style, stands near the base of the triangle at the north end adjacent to 35th Street and faces the open square to the south. The bronze figures and bell, supported on a granite base 10 feet above the square, are partly sheltered by a granite niche flanked by two Copiathian columns. The simple and impressive pylon thus formed is surmounted by the granite housing which shelters the double faced, rebuilt Herald Clock. On either side of the 5 foot illuminated dial, facing outward, two green-eyed bronze owls blink continually during the dark hours…

Once again Minerva will watch over her original domain. Once more her companions will mark the hourly passing of time for millions of hurrying feet in one of the City’s busiest squares, and again the Owls will blink at passers-by.

The Park Department, under whose supervision the project was executed, is grateful to all who participated in this work and made possible the restoration of this symbol of Old New York.

Our thanks go to the Work Projects Administration who carried out the designs and to Chancellor Chase of New York University, through whose efforts the group was presented to the City of New York.

We are particularly grateful to the civic-minded business interests and individuals in the neighborhood of Herald Square who generously contributed to the restoration.” 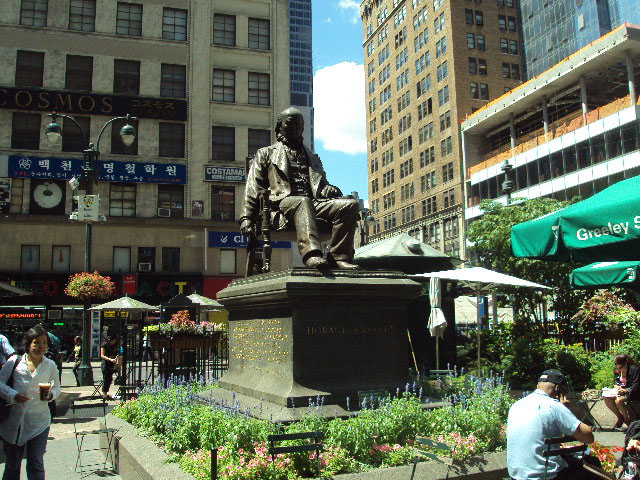