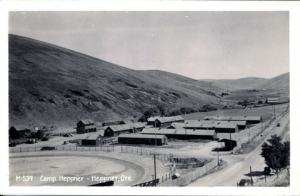 In 1935, Civilian Conservation Corps (CCC) workers completed Camp Heppner on a site just east of the Morrow County Fairgrounds’ race course and north of the Heppner Highway. From its founding to closure in November 1941, several CCC companies resided there while assisting local ranchers by implementing soil conservation demonstration projects.  No evidence of the camp remains.

The Heppner Gazette-Times, the town’s weekly newspaper, reported in early July 1935 that local carpenters and “28 CCC helpers” were running ahead of schedule in completion of the camp. The report also stated that the work had entirely eliminated unemployment in the town given the large crew at work for Heppner’s Tum-A-Lum Lumber company required to produce the lumber for the camp.

Several months later, the newspaper announced the arrival of Company 2113 with 190 CCC workers from Massachusetts, joining local CCC workers and Army and Soil Conservation staff to begin a gully control program on Willow and Hinton Creeks. The first priority of the Soil Conservation Service (SCS) camp was to cooperate with local ranchers in gully control by creating retention dams to raise the water table and slow runoff. The SCS program for the Willow Creek watershed also focused on building up land cover to prevent rapid runoff and subsequent erosion.

The original plan for the camp involved demonstration projects that could be completed in two years, but with the success of conservation programs and the support of the community Camp Heppner stayed for six years (1935-1941). In 1937, a new company came in from New York and New Jersey (2945 – see photo) to be joined by Company 4255 (primarily Oregon recruits) a year later. The camp’s Army and Soil Conservation Service staff changed in 1938.

Throughout the camp’s operation in Heppner, the Heppner Gazette-Times reported favorably as demonstration projects came through. In May 1937, the newspaper extended an invitation to the community to join the “CCC boys” in a car caravan to see a completed diversion channel on Ditch Creek that brought “liquid gold” to local farmers with a flow of 22 million gallons daily. The City of Heppner benefitted from a project in 1938 that cleared brush as workers straightened and widened Willow Creek’s flow through town. This was the first serious flood control work for Heppner since its catastrophic flood in 1903.

Awareness that Camp Heppner might lose its CCC labor force was acknowledged in March 1940 when the Heppner Gazette-Times noted that “removal of upwards of 225 men within a short time will be a noticeable drop in population and the flow of cash through business channels will be considerably diminished.”

In addition to local concerns over the camp’s contribution to the local economy, Heppner area ranchers appreciated the improvements gained through the Soil Conservation Service’s program. Local ranchers drew up a petition in 1941 to form a Soil Conservation District, noting that the petitioners “highly appreciate the work that has been done by the Soil Conservation Service in the Heppner area in the past six years but also appreciate the fact that there is an unlimited amount of work still to be done” (Heppner Gazette-Times). Discussion at the same meeting noted that SCS advisers had indicated that a district would have to be organized to ensure that the present CCC camp is to be retained in Heppner. Several months later, local ranchers took the vote to form the district. 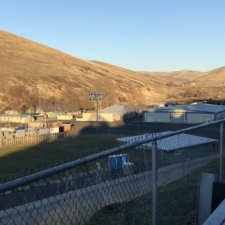 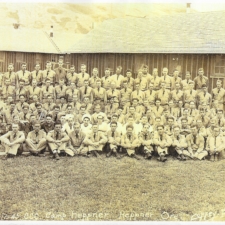 On loan to the Forest History Center by John & Mary Baldwin