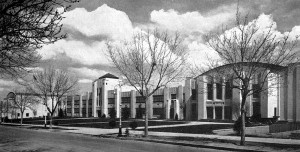 The PWA allotted funds toward the construction of the $510,000 Helena high school, which was built between 1934 and 1935. A 1939 survey of PWA works described the school’s construction:

“The high school was rehabilitated and designed to resist earthquakes. The brick walls were removed, and reinforced concrete substituted with special column and beam reinforcing. The building was divided into individual units separated by 4-inch spaces.

The building didn’t last long in its original form… Helenahistory.org reports that: “Dedicated on September 21 1935, the new building was heavily damaged by the October 1935 earthquakes. According to post-quake estimates by U. S. Army engineers, it was about 75% destroyed.”

Reconstruction of the building took two years. The high school was relocated in 1955, at which point the building became the Helena Junior High School. The building houses the middle school to this day.