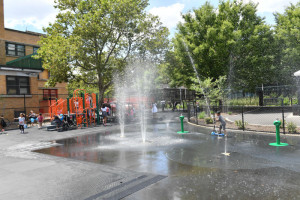 The NYC Parks website explains that, “This playground received its name after the city purchased the land from the Heckscher Foundation for Children in 1935.  The property had served as a public playground since 1934.  When Parks took over, the property included a recreation building with a dental facility and an indoor play area.  The park was home to summer activities such as puppet shows, storytelling, and arts and crafts.  Originally, the playground was a little under one acre in size.”

The Department of Parks further improved the playground and officially opened it to the public in December 1935. As researcher Frank da Cruz explains here, almost all New York City Parks Department projects between 1934 and 1943 were accomplished with New Deal funds and/or labor; from April 1935 on, the WPA became the main source of this support.

The park was expanded further in the 1970s.