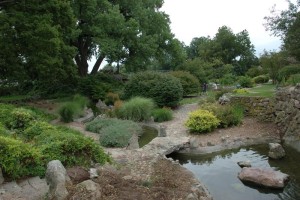 The oldest portion of the park, the block between 5th and 6th Avenues and 29th and 30th Streets, dates back to August 7, 1876, when it was given to the city by Thomas Perkins and James Harford “for the sole and only purpose of a public park for the use and benefit of the inhabitants of said city,” according to the deed. It was later dubbed Third Ward Park, and was so designated for many years. Beautiful trees, grass and flowers, some sidewalks, a couple of drinking fountains and a few benches were all this park could boast in the early years when its location was near the north edge of the residential section of the city. The name of this park area was later changed to Lincoln Park.

When the Chautauqua was organized for summer entertainment in Kearney in 1907 (Buffalo Tales, Vol. 10, No. 7), the block north of Third Ward Park was acquired by the city for Chautauqua grounds, and from 1907 until 1924 this section of the park was named Chautauqua Park. Beyond these grounds to the north were acres of farm and pasture lands.

In 1924 William E. Harmon of New York City organized the Harmon Foundation for the purpose of lending financial assistance to communities wishing to open playgrounds. Esther Stock Kroeger, secretary of the Kearney Chamber of Commerce, heard of this, and with the acquiescence and assistance of Chamber president Ray E. Turner, made application for a grant from the Harmon Foundation. Fifty communities of the nation would receive funds to secure fields for playgrounds. 784 towns applied; Kearney was one of the fifty lucky recipients.

The Harmon Foundation donated $2,000.00 to the city to purchase fourteen acres. The cost was $2,640.00 and the city put up the extra $640.00. The land purchased was the four-block area between 31st and 33rd Streets, and between 5th and 7th Avenues. Later the city would also purchased the half block between Park school grounds and 31st Street, making the park six and one-half blocks in size, and so it remains today. The four-block area purchased by the Harmon gift was designated Harmon Field. This was a stipulation in the deed. For five years the park was required to operate under this and other stipulations laid down by the Harmon Foundation.

A Board of Park Commissioners was created by city ordinance in March of 1925. Mayor T. H. Bolte appointed W. T. Souders, Ray E. Turner and G. A. Fairchild to the first park board. During the five-year term of the Harmon contract, the park commissioners entered the National Playground Beautification contest, winning cash prizes each year which were used exclusively for beautification projects. The board started other development; trees were planted and playground equipment was installed.

Community interest was high. The Kiwanis Club provided a wading pool for children, the Cosmopolitan Club constructed three tennis courts, and the Rotary Club and other civic organizations, as well as individuals, made cash donations or equipment contributions. The Kearney Woman’s Club placed the first picnic tables in the park.

Bill Cave was the first park policeman, appointed in 1926 at a salary of $75.00 a month. In addition to his police duties, he supervised the installation of the first playground equipment in the park, which included a double slide, merry-go-round, ocean wave and traveling ladder.

The park also had the two croquet and two racket courts on the east side, north of which were the formal flower gardens with a fish pond in the center. The rail around the pond had prongs pointed straight up, but after causing injury to several children, the prongs were all bent over and rounded, and remain so today. On north of the gardens were at least six horseshoe courts. North of this was the ball diamond. Next to this area in the center of the park was the playground, north of which were monkey cages, later used for squirrels, pigeons and similar small animals and further north was a corral for about 14 ponies. “I was one of the lucky children who took care of these ponies,” says Mrs. Lynch, “and it was a highlight of my childhood. The ponies were owned by the city and were taken care of by the Barklund family whose farm was located at 33rd Street and 4th Avenue. We took the ponies to the park at 9:00 a.m., back to their barn at the farm about 11:00, then back to the park from 1:30 to 4:00, and again in the evening from 7:00 to 8:30. The rides were offered to children every weekday and on Sunday afternoons. The pony rides were discontinued when plans for the swimming pool in that area were made.”

The watering of the two-block wide grassy areas from 29th to 33rd Streets became a gigantic job, and in 1932 James K. Harvey was hired to do this work. Small, rounded, “half-moon” sprinklers were used. His wife Eleanor recalls that it was a demanding and exhausting job from 7:30 a.m. until 6:00 p.m. daily during the hot and dry days of the drought years of the 30’s.

The period of the 1930’s was one of financial depression when the heat, drought and grasshoppers seemed almost too much to bear. The development of Harmon Field must have been a symbol of hope because in spite of the difficult times, the people of Kearney in 1936 voted in favor of a local bond issue of $35,000 to construct a swimming pool and bathhouse on the west side of Harmon Field. Plans for a modern, up-to-date swimming pool, 160 feet long and 82 1/2 feet wide, with bathhouse, were drawn up by Architects McClure and Walker. However, the project was held up before contracts were let when it was learned that the city might be eligible for a federal PWA (Public Works Administration) grant which would provide a more comprehensive park project. On June 15, 1936, a grant of $28,600 was applied for.

The Kearney Daily Hub of June 16 explains: “The $35,000 swimming pool would be built as planned, and the extra funds spent for a band shell, shelter houses, rock garden and other park improvements, making the project total $63,600 in all.” On September 6, the Public Works Administration (PWA) advised that a grant of $21,600 had been approved and the project got under way. Henry Knutzen was the general contractor. The pool opened in late June of 1937 and served the Kearney community well.

Plans for a rock garden at Harmon Field were initiated also in 1936. The Hub of May 21, 1936 reported on a meeting of the park commissioners who predicted that “Kearney’s principal park, Harmon Field, will some day have a beautiful rock garden … The rock garden may be built much sooner and much more cheaply…if all Kearney residents who travel to mountain country, the Rockies or elsewhere,…will pick out just one or two odd-shaped rocks or stones and bring them back to Kearney, the park would soon have a very good start toward its proposed rock garden.” The pyramid of small rocks (across the walk from the lighthouse) is undoubtedly the result of this suggestion. It is said to contain a rock from every state. The major construction of the rock garden, however, was accomplished through a WPA project, which was approved September 4, 1936. WPA was one of the federal government’s programs to put people back to work during the depression of the 30’s. The project application was signed by Ray Turner, president of the park board, and Joe Elliott, fiscal officer. H. G. Quiggle was superintendent of the park improvement project and George Reiber was construction foreman. Report of the completed project, filed February 8, 1938, listed the work accomplished: 6 horseshoe courts, 6 tennis courts, 8 recreational facilities, 4 retaining walls and revetments, 1200 lineal ft. sidewalk, 14 slopes, berms and terraces.
The rock garden apparently was not professionally designed, no blueprints exist. Rocks and boulders were hauled in by Union Pacific flat cars, free of charge, from Wyoming, Utah, Kansas, North and South Dakota, as well as Nebraska. The largest rock came from the Republican River Valley south of Franklin. The rocks were loaded and unloaded by WPA workers. The story is told of one huge rock weighing 8,400 pounds being moved on a sled through the park and while crossing the stream the rock rolled off blocking the water. It was too heavy to move so workmen dug under it to let the water flow. The rock stayed where it fell and can be seen today.
In descriptions of the many park improvement projects at Harmon Field, no mention was ever made of the lighthouse, and no clue as to when it was built. The answer was found in the May 6, 1940 issue of the Kearney Daily Hub, in an article setting out the upcoming summer season at the park: “Stone is on the ground for the erection of a lighthouse overlooking a portion of the rock garden. It will have a rounding stair. Construction is expected to be under way within 10 days. Incidentally, rocks from the first school, first courthouse and first city hall in Kearney have been used in the rock garden.”
The NYA (National Youth Administration), a national program for youth in the depression period, constructed a lily pond directly east of the swimming pool in the summer of 1937. It has since been filled in and made into a rose garden. NYA was also in charge of the construction of the park office in 1939.
The two shelter houses built with money from the first PWA park improvement grant became the wings for a Sonotorium, the next major park project in 1938. On the occasion of its dedication on June 21, 1938, the Kearney Daily Hub describes the structure and its equipment: “Kearney’s new Sonotorium–was formally dedicated at a program last evening which drew thousands of spectators to Harmon Field Park. The structure is an open-air theater with a broad, sixty-foot open air stage, flanked on either side by tall concrete towers and spreading concrete wings which house an electric sound system capable of being heard for any distance from a few feet up to a mile or two.” This very advanced speaker system was built by the Keller Radio Service of Kearney, and involved highly technical equipment. The east pylon of the Sonotorium where the set was located was full of wires, plugs, knobs and instrument boards. A new electric organ funded by the Junior Chamber of Commerce was installed for the dedication and played by LoDesca Miller. Federal and state PWA, WPA and NYA officials were on hand. Mayor D. Wort expressed thanks to Architects McClure and Walker, and to the park commissioners. The national anthem, played on the organ, marked the end of the dedication. Programs at the Sonotorium have since been a summer tradition.
The confusion and uncertainty of the park names was cleared up by action of the City Council on April 17, 1939, by which “Harmon Field and Lincoln Park, immediately adjacent to each other, shall be designated as Harmon Park.” 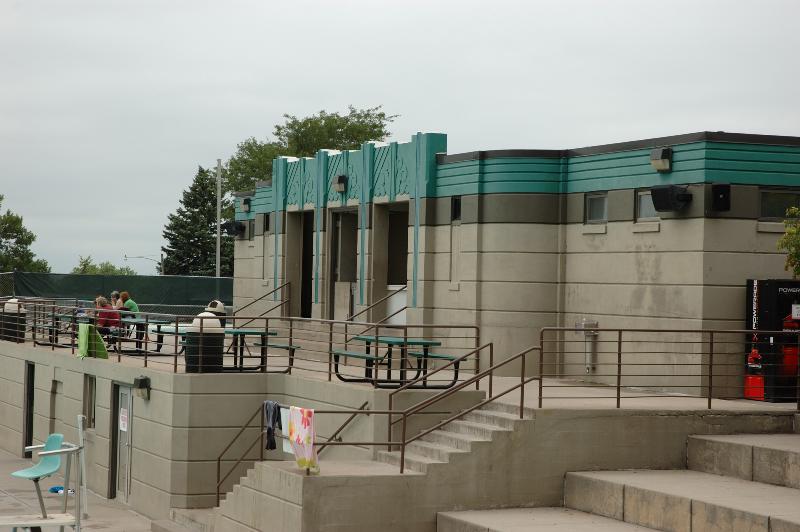 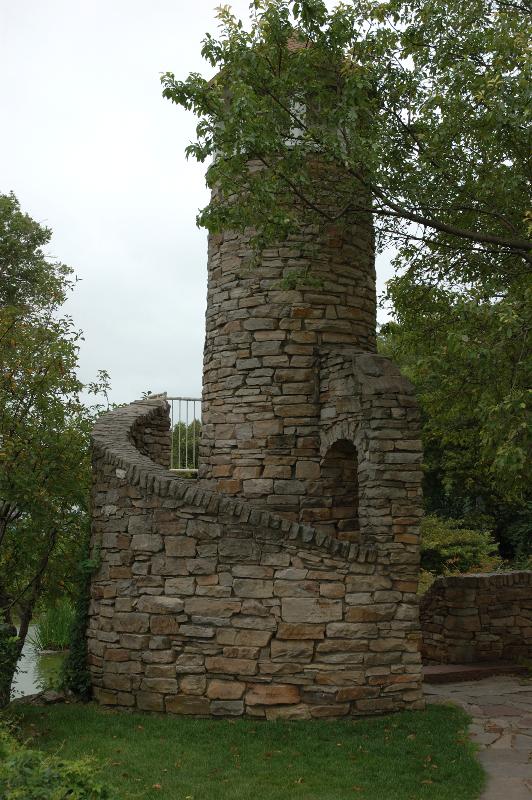 
Between 5th and 6th Avenues and 29th and 30th Streets.
Kearney, Nebraska