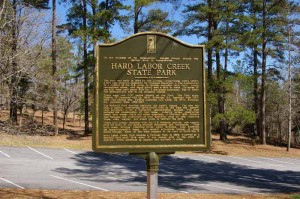 An onsite marker commemorates the extensive work of the CCC at this site, reading in part:

“This park was built in 1934 by the Civilian Conservation Corps (CCC), a New Deal program sponsored by President Roosevelt. It was administered as a division of the U.S. Army to reclaim unusable farm land, create recreational areas, and teach young men a skill or trade. Enlistees of the CCC were paid about $30 for a six-month enlistment, $25 of which was automatically sent to the enlistee’s family.

The plan included the construction of two lakes, camping areas, observation tower, boat house, trails and other amenities. A February 1935 nursery plan included the cultivation of over 850,000 trees on site including pines, oaks, maples, and sweet gums to reforest the park.

These CCC camps, together with the U.S. Forestry service, are responsible for many of the park’s original structures and landscapes. They built roads, bridges, retaining walls, Camp Rutledge, Lake Rutledge, the superintendent’s home, and several structures located at Camp Daniel Morgan. Much of the work stopped at the start of World War II.”  (Quoted at http://georgiainfo.galileo.usg.edu)

The park was added to the National Register of Historic Places in 2013. A press release from the Georgia Historic Preservation Division provides further details:

“The extant historic buildings and structures include those built by the CCC as their work camp and the buildings and structures built for the park.  Following the standardized National Park Service plan and design for a recreational group camp, Camp Rutledge was constructed on the east side of Lake Rutledge and consists of cabins and  lodges surrounding a central administration area with dining hall, infirmary, arts-and-crafts building, central washhouse, and assembly shelter.  Camp Daniel Morgan for girls is located on the west side of the lake, but only the dining hall, administrative building, staff quarters, storage building, and unit lodge were constructed by the CCC.  Cabins were later added to Camp Daniel Morgan.  Other CCC buildings and structures include day-use shelters, comfort stations (restrooms), and a staff residence.  The CCC buildings are wood frame, one-story, rectangular buildings with gable roofs and are built in the common NPS rustic style popular for early 20th-century parks…

…The CCC planted trees, reshaped the farmland to prevent erosion, and built many landscape features including the lakes, rock walls, roads, paths, and trails.”   (http://www.georgiashpo.org/node/2170)