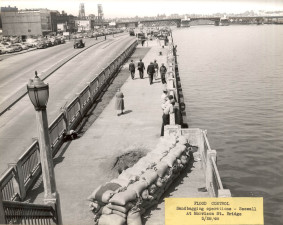 Portland’s morning newspaper, The Oregonian, announced in late January 1936 that the city’s Seawall Railing was nearing completion, bringing with it a harbor line that was “beautified and protect(ed).” The ornamental, reinforced concrete railings added 3 ½ feet to the harbor wall along a stretch of the Willamette River from Jefferson Street to the Steel Bridge.  Approximately every 100 feet, heavy bases had been added to allow for ornamental light standards along the wall. Federal relief funds provided by the Public Works Administration (PWA) provided $60,000 for the completion, employing approximately 100 Works Progress Administration (WPA) workers.

Planning for the harbor wall (or seawall) began in the mid-1920s when city officials determined that flood protection, sewage work, improved access and beautification could all be achieved with such a structure. A mile-long harbor wall and intercepting sewer would rejuvenate the city’s outdated waterfront by controlling the downtown’s annual floods that backed up the existing sewer system. At the same time, it was viewed as an opportunity to improve access to the river for pedestrians and meet the needs of larger ships docking on the west side of the river.

With the announcement of WPA funds, completion of the harbor wall was prioritized. The new balustrade added an additional 3 ½ feet, allowing for more effective sand bagging, as well as beauty and the design provided additional opportunities for mooring large ships by including mooring posts. Such mooring devices permitted naval ships to dock at the seawall, thus becoming a regular part of the city’s celebration of the Rose Festival. As noted by Neil Barker, the installation included 37 cast steel mooring posts and anchor posts every 12 feet featuring “simple decorative moldings.”  Today metal railings replace the solid concrete walls between the anchor posts.