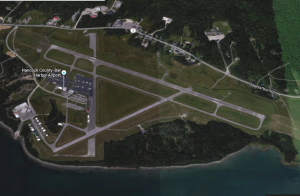 Hancock County-Bar Harbor Airport is a Hancock county owned, public use airport located in Trenton, Maine. During the summer months activity at the airport is the busiest in the State of Maine.

From 1927 until 1934 there were discussions and investigations for a suitable location by the Bar Harbor chamber of commerce of the need of an airport to service the Bar Harbor region.

“The Bar Harbor special town meeting was held on February 13, 1934, at 2 p.m. Julian Emery, the Moderator, read Article 2 to the meeting and then assured the voters that “the Jordan River mentioned was the one in Trenton and not one in Asia.” After hearing a description of the work to be done, learning that Trenton had approved the airport by a vote of 57 to 1, and hearing from Captain Jones, Aeronautical Director in the State of Maine, that he had requested 125 men to do the job – more than for any other such project in Maine except for the airport project in Augusta – the townspeople overwhelmingly approved Article 2 by a vote of 169 to 58.

Where would the Town get the money to purchase the land, clear it, and then build and operate an airport and landing field? One source of funds was the issuance of “the Town’s negotiable notes or bonds in a sum not exceeding $20,000,” an amount insufficient to buy all the land. The other source is referred to in Article 4 adopted at the special town meeting: monies raised by the Town’s notes and bonds would be used “in conjunction and together with funds to be expended by the United States Government with and under the supervision of the Public Works Administration,” the CWA, and ultimately FERA.

Remarkably, within a three-week period in the winter of 1934, options for the parcels needed for the airport site had been obtained and special town meetings in Trenton and Bar Harbor had approved the project. By the end of April 1934, the purchases had taken place, and the deeds had been recorded in the Hancock County Registry of Deeds. The Inhabitants of the Town of Bar Harbor, the corporate name of the municipality, had become the proud owner of a large parcel of land char would be known initially as the “Bar Harbor Municipal Airport.”

The March 7, 1934 edition of the Bar Harbor Times reported that “C.W.A. men have been transferred from Bar Harbor work onto the Airport Project at Trenton.” Taking advantage of the warm weather, they had started clearing the land even before the deeds had been signed! In early May of 1934, the Selectmen voted to hire six more trucks at $10 per day in addition to the nine trucks already assigned to the project, to hire a tractor at $1.50 per hour, and to increase the pay of the nine trucks already hired by $2 per day, all “in order to get [a] portion of [a] runway for use this summer.” Several more times that late spring and into summer the Selectmen voted to hire more assistance or to increase the pay. One runway was built that summer and a second was built in 1936.” (Fenton)