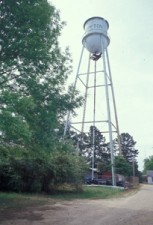 “The Hampton Watervorks is located on the north side of Hunt Street west of Lee Street in downtown Hampton, the seat of Calhoun County in southwest Arkansas. The metaI water tower and associated well house were built by the Pittsburgh-Des Moines Steel Co. for the Public Works Administration in 1937.”

The Hampton Waterworks remains today as a testament to the work of the Public Works Administration, a New Deal agency that put unemployed Americans to work during the Great Depression while bringing badly needed infrastructure to communities of all sizes throughout Arkansas.”