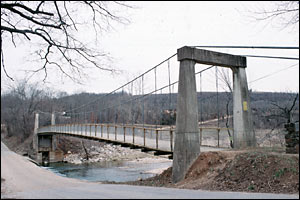 “The Haggard Ford Swinging Bridge is being nominated with state significance as an amendment to the “Historic Bridges of Arkansas” multiple property nomination under Criterion A for its association with the World War II era of bridge building and with the Works Progress Administration. Under Criterion C, the Haggard Ford Swinging Bridge is significant for its engineering as one the few remaining historic suspension bridges in Arkansas…

Haggard Ford is named for Mrs. Nancy Haggard, a widow with three children who lived near the creek crossing at the turn of the century. In the late 1930’s it was decided to construct a bridge at the ford due to the gravelly nature of Bear Creek, which routinely ensnared automobiles as they crossed stream. The Works Progress Administration paid local laborers a dollar a day to construct the bridge, which was started in 1938 or 1939 and completed in 1941.

On May 7, 1961 a big flood washed much of Harrison away and rendered the Haggard Ford Swinging Bridge incapable of supporting vehicular traffic. It was replaced by an adjacent low-water concrete slab and county maintenance was discontinued.

By 1977, the bridge had deteriorated to the extent that many citizens believed it to be a hazard to the numerous children who patronized the Bear Creek swimming hole underneath the bridge. After several requests for its removal, Boone County Judge Clifford Tomlinson ordered the county road crews to dismantle the bridge. Fortunately, Leon and Gertrude Karasinski circulated a petition signed by 500 residents to save and restore the bridge for foot traffic only. A Bridge Restoration Committee was formed and a “plank sale” rally held on July 30, 1977. Supporters purchased $10 planks on which their name was inscribed. Volunteer labor rebuilt the decking, which was replaced at a cost of $3,281.58. Although 340 planks were needed to replace the deck, over 400 boards were sold, so the hand rail was reconstructed with the additional planks. The grand opening was held on September 3, 1977 with State Representative Hugh Ashley as the speaker.”