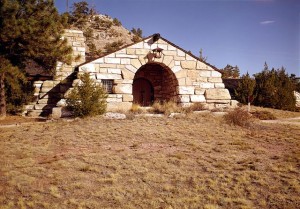 Wyoming State Parks website:
“This park provides the finest examples of Civilian Conservation Corps (CCC) work in the Rocky Mountain area. Built by the CCC, the Guernsey Museum, the Castle and Brimmer Point are available to explore. The museum is perched on a high cliff, overlooking the water. The building itself is made of hand hewn timbers and hand forged iron. The roof is framed with th covered with split cedar shakes, and the floors were formed by pieces of smooth flagstone. The Castle, with its giant fireplace and winding steps, leads to an observation area for a spectacular view of the park.

An extensive network of trails was originally planned and partially built during the operation of the CCC camps. Ever since that time hiking and trail use has been a major feature at Guernsey State Park. Approximately ten miles of CCC trails have been restored on the park.”