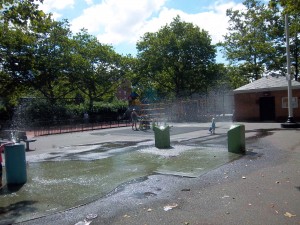 “Greenwood Playground first opened to the public on December 19, 1935, as one of hundreds of Works Progress Administration-era playgrounds commissioned throughout the city, and built under the direction of Parks Commissioner Robert Moses (1888-1981). It contained a recreational building, a large wading pool, and standard playground features such as seesaws, monkey bars, slides, handball courts, and an open play area. At the time, its single acre was surrounded by residential lots to the east and the Greenwood Avenue Methodist Church to the north. The Board of Transportation had leased land underground from the Board of Estimate to build the cut-and-covered tunnel of the Independent Subway’s Fort Hamilton Parkway station. The playground was built after completion of the subway station. Parks permanently acquired this land for $50,000 in 1941, and added it to the parkland.”

“Renovation needs for Greenwood Playground were identified in 1985, and construction and restoration were completed in 1993 for over $1 million. The designers, Signe Nielsen Landscape Architects, replaced the Works Progress Administration-era (WPA) playground features with new modular equipment, and restored sections of the basketball courts and softball fields. The monument plaza was also restored with new brick pavers, stone benches, and an enclosed planting area.”

Project originally submitted by Evan Kalish on May 14, 2014.